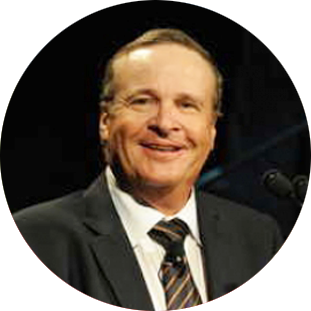 Dennis is the only person paralyzed below the waist who earns a living as a professional golfer. He has lived his life by following this philosophy:

“If there is something you really want to do – no matter how impossible it may seem, with enough hard work and perseverance, you can do it.”

In 1967, Dennis went to North Texas State University on a golf scholarship. During his senior year, he led the school to its fourth consecutive Missouri Valley Conference golf championship. That same year, Dennis was runner-up in the prestigious Tucker Intercollegiate Golf Tourney, and finished 11th in the United States Golf Association Amateur Championship. Dennis’ dream was always to play successfully on the  PGA TOUR. From all appearances, he was well on his way.

To sharpen his skills, Dennis spent 1973 competing on the South African tour and in mini-tour events in the U.S. Shortly before the 1974 Tour Qualifying Event, Dennis went home to Neptune, New Jersey, for a visit and to play a few friendly rounds of golf. On July 21, 1974, he was riding in an old style 3 wheel golf cart down a steep hill on a course near his house when the brakes failed. Dennis was thrown from the cart and suffered severe spinal cord damage.

At a hospital in Morristown, New Jersey, Dennis was diagnosed as a T-12 level paraplegic and told that he would never walk again. That diagnosis made playing golf highly unlikely. However, at age 24, Dennis was determined he was never going to give up the game he loved. He then began his quest for a new dream!

After four months in the hospital and five months of rehabilitation, Dennis went home. Immediately, he and his Dad began searching for ways to get Dennis back on the golf course again. The first thing they tried was hitting golf balls from his wheelchair, this was a great beginning because Dennis was once again hitting golf shots, but he was still not able to play golf because he couldn’t push the wheelchair all the way around the course. Then one day they came up with an idea: why not mount a swivel seat on a golf cart?

Working with his father and a couple of friends, Dennis fashioned a seat on the passenger side of a golf cart. This new invention would swing away 90 degrees from the golf cart and allow him to play the game he loved. Everyone said it would be impossible, but Dennis defied the odds and was back on the course again. “I had to experiment and modify my techniques,” said Dennis. “I basically tried to work on things I could do and not worry about the things I couldn’t. Dennis taught himself to use long leg braces which enabled him to hit sand shots and to putt one-handed while balancing himself on his crutches. He got his game to the point where he could break 80 on an average course.

He continued practicing his game, and people started noticing what Dennis could do. Before long, pros were asking him to conduct clinics at their local clubs. “I liked to put on the clinics because they made me feel like I was preparing for a tournament again.” Those clinics evolved into “The Dennis Walters Golf Show”.

The Dennis Walters Golf Show is a one-hour combination of golf mastery and human inspiration. The show is also about dreams and as Dennis says in every show, “I’m not talking about a dream you have at night. To me a real dream is having a positive thought in your head and in your heart and doing whatever it takes to make that come true. Also, if you have a dream and it doesn’t work out, never stop dreaming, get a new dream!” Always persevering and with a never say die attitude a new dream began…..the Dennis Walters Golf Show.

Since 1977 Dennis has traveled over 3.5 million miles and has amazed audiences at over 3000 performances. He has appeared in all 50 states, Mexico, across Canada, and the United Kingdom. At each and every show he has been accompanied by one of his canine rescue pals, usually doing about 90-100 shows per year. The show is a program not only of golf lessons, but also life lessons.  Dennis tells his story and encourages others to reach for their dreams, strive for excellence, and do something they didn’t think they could. He uses his own personal experience as an example to challenge each person in the audience to do something in their life that perhaps they thought was impossible. For with hard work, dedication, perseverance, you can achieve success at anything.

Dennis has been recognized as one of the most honored figures in the game for his work on and off the golf course. He is a recipient of the Ben Hogan Award in 1978 for his remarkable comeback. In 1994 Dennis became one of 12 Honorary Lifetime Members of The PGA of America. Other members in this elite group include US Presidents Dwight Eisenhower, George H W Bush, and Gerald Ford, as well as Bob Hope and Gary Player. The PGA of America awarded Dennis its highest honor The Distinguished Service Award in 2008. The United States Golf Association presented its highest award, the Bob Jones Award to Dennis in 2018. Dennis’ career reached its pinnacle In 2019 when he received golf’s highest honor, induction into The World Golf Hall of Fame. In the long and illustrious history of golf, only Dennis Walters and Patty Berg have won the Ben Hogan Award, the Bob Jones Award, the PGA of America’s Distinguished Service Award, and induction into The World Golf Hall of Fame. That is quite an accomplishment for someone who was never expected to play golf again and is perhaps the greatest comeback in sports history. Dreams do indeed come true!